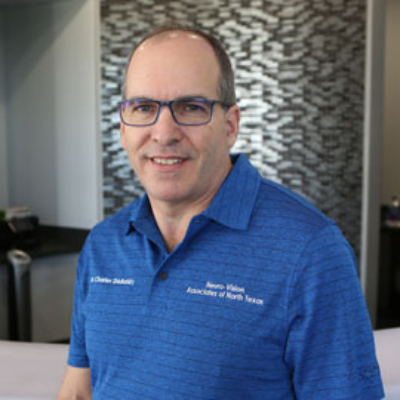 Dr. Shidlofsky was born and raised in Lawrence, New York. His family moved to the Dallas area when he was 16 years old. In 1980, he graduated from J.J. Pearce High School in Richardson, Texas. Dr. Shidlofsky completed his Pre-Optometry studies at the University of Texas at Austin in 1984. He then attended Southern College of Optometry in Memphis, Tenn. where he received his BS in 1986 and OD in 1988. Upon graduation, he moved back to to the Dallas area to begin his practice.

Dr. S, as he is known around the office, has been very active in Neuro-developmental Optometry for most of his years in practice. He has developed and integrated many unique therapies that have helped thousands of children who have struggled in school due to vision problems often seen in: ADD/ADHD, Autism Spectrum Disorder, Sensory Processing Disorders as well as some of the classic vision problems related to focusing, eye teaming, eye movement skills, visual-spatial skills, and visual perception issues. He has expanded his work to include those with traumatic and acquired brain injury, stroke, and other neurological processing problems. In addition, he works with several professional sports teams in the Dallas area as well as weekend athletes on developing vision skills. Dr. Shidlofsky is a Clinical Director for the Special Olympics Opening Eyes Program.

Dr. Shidlofsky lives in Plano with his wife of 30 years, Sherri. Dr. Shidlofsky has three grown children, Alyssa, Kara and Ian who are spread out throughout the country. He stays active by playing ice hockey, traveling and family activities.